The 14th World Shotokan Karate-Do- Federation (WSKF) Championship was held at Tokyo from 19th to 25th August 2019. Individual and group karate competitions along with the 30th-anniversary party were held during the championship. The Director and Chief Instructor of Emirates Karate Centre, Abu Dhabi Mr Sensei Shan Ismail won the Bronze medal in the veteran category during the championship. This is the second achievement of Mr Sensei Shan Ismail in the world championships. His first win was during the 2010 World Championship held in Australia. It was also a bronze medal. He is a passionate and skilful Karate master who has about 25 years of experience in the field. He is a member of many international karate organisations and has been an active member in organising seminars and workshops on karate training and methods in America, Switzerland, UK, Australia, Thailand and Turkey.

Sensei Shan Ismail- the man of the hour 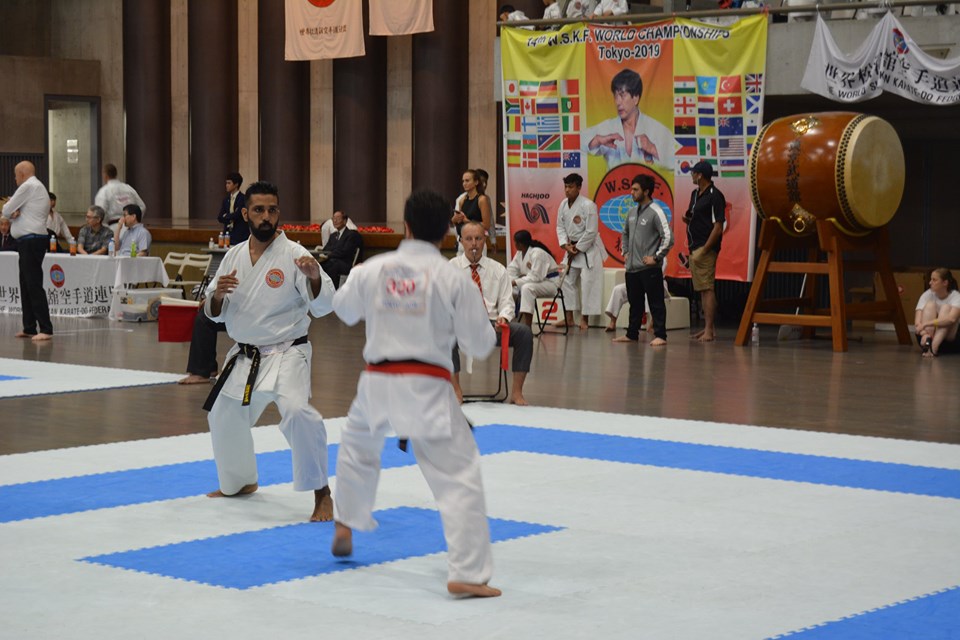 Hailing from the beautiful and heritage-rich Malappuram district in Kerala, India, Mr Sensei Shan Ismail is a professional martial arts trainer, a fitness class instructor, gym assistant and a personal trainer. Mr Sensei Shan Ismail is trained to instruct and supervise Martial Arts classes to students of all ages. While teaching Dojo Etiquette to his students, he calls himself an ever-evolving student. He is a certified kickboxer (Muay Tai). He has 5th Dan Black Belt in Karate and 4th Dan Black Belt in Kung-Fu. He is the 2011 UAE Karate Champion and has held the first position in UAE Open Karate Championship in 2016 and 2017. In 2013, Mr Ismail also won 4th prize in World Karate Championship held in Turkey.

Mr Ismail also runs a children’s Karate and Sports Activity club and a separate fitness class especially for teenagers focusing mainly on increasing their self-esteem and confidence. He focuses on teaching karate with due regard to both traditional principles and modern style and thus imparting a high standard of techniques to his students. He has students from all parts of the world. He has organised many internal karate competitions in Emirates Karate Centre and many other karate competitions in and around Abu Dhabi. Mr Ismail has attended many camps and workshops related to the martial arts including the 2016 Swiss Karate-Do Symposium International Karate Camp in Switzerland.

In Emirates Karate Centre, Mr Sensei Shan Ismail has trained thousands of students who have now mastered in Karate. This achievement of Mr Ismail is the result of his years of practice and dedication to Karate. According to his close allies, he practices Karate, every day, without a break and he makes sure that every student feels a safe and positive environment within the Centre. This is one reason why Emirates Karate Centre is also world-famous for bringing out the best karate students every year. It is one of the few training centres in Abu Dhabi that believes and practices the idea that karate cannot be mastered overnight and helps in becoming students, both young and old, to achieve a lot more in the field than what they wished for.

organisations in the world. With the headquarters in Japan, WSKF has member branches in Australia, Middle East, Europe, USA and other parts of the world. This diversity has helped WSKF to impart its members a sense of brotherhood, different from their religion, country or ethnicity. The unique feature of the WSKF members and groups is that they blend tradition with contemporary style while teaching and practising Karate. WSKF was formed in 1990 to cultivate and spread this culture of Karate, worldwide. Shotokan Karate is the most dynamic martial art which is ideal for all including children and women and can act as an instant stress-reliever. The WSKF championship is held every two years in Japan. This year, there were also camps and workshops conducted by the most ardent and experienced martial artists. Also, the 30th-anniversary celebrations were held. The competitions were held for the junior and senior category on 23rd and 24th August, respectively. The championship was held in Nippon Budokan stadium which is world-famous for conducting the best martial arts competitions and which will also host the 2020 Olympic competitions on Karate. The 2020 Tokyo Olympics will mark the first appearance of Karate as an Olympic game.